Simple really – my wife and I had been lucky enough to get tickets to sit in as audience members of the BBC’s flagship news/current affairs programme, Today. They went on air at 07:00 (on Saturdays it’s late start for them because it’s normally earlier). I was more than a bit impressed.

So what can we learn/copy from radio presenters as business presenters? Well here are a few things I noticed. I’m sure there’s more!

Seriously, soooo pro. So laid back they were horizontal. Except not. They just made it look easy. I spent seven years touring as a theatre tech so I know a thing or two about going live at a certain time – and yet these folks never ran. In fact they never even looked rushed.

Preparation was obviously the key here, as was experience, but the significant point we often overlook as presenters is that by looking like they were chilled out, the BBC’s presenters make the audience relaxed and confident. At no point was there a shadow of doubt in my mind that this small miracle of technology (live broadcast from multiple locations with no rehearsal and dozens of moving parts) would go wrong.

That left me with more energy and attention to give to the content or what was being presented. It also meant I trusted the presenters more. Doesn’t that sound like that the Holy Grail of better presentations?

But compare that to the typical business presenter, who’s rushed and flustered. I’m not suggesting you should hit a state of zen when you present, but you should sure as hell not share your nerves and anxiety if you want you – or your content – to be taken seriously. You know the score… turn up early, rehearse, check your kit before the audience arrive! 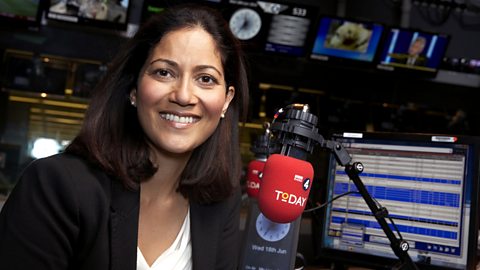 It was hard to see the face of London-based presenters over the video link, but facing me on stage, and smiling like she was genuinely enjoying it, was Mishal Husain.  The smile, of course, put everyone at ease (even guests who weren’t particularly comfortable) but it served another, very significant technical faction too…

Sitting next to a singer, I was reminded very clearly that smiling as you sing changes the tone, and is a standard technique for when you want to sound brighter, sharper and fresher. So the lesson here? Smile when you need to, even if you’re not happy!

And then there was Ms Husain’s voice. Oh my. It’s glorious and it’s rooted in her gut and it feels like it’s as trustable as Apple Pie. it should be the standard for all would-be presenters. Obviously there’s a lot of genetics involved in a voice like that but there’s one particular, learn-able technique that made her sound so easy on the ear and (more importantly from a presenter’s point of view) trustworthy, credible and authoritative…

Her breathing was from her diaphragm. Never once did her shoulders or chest betray so much as a flicker of tension (even when she knocked her notes and computers over!). I can’t go into the details of how to do that in this blog, but either search YouTube (such as here or get yourself over to our online voice course.

Just like “In space no one can hear you scream” (remember that movie?) on the radio no one can see your hands, so what made them important?

No wasted movements, no wandering hand syndrome, but gestures that punctuated whatever was being said, almost like a dancer’s interpretation. The result was that the spoken word was more vibrant and energised than if the presenter had tried to keep her hands unnecessarily static.

Yes, I know, it’s possible to over-gesticulate on stage where-as you can’t do that on radio because the presenter can’t be seen (usually) but I’ve almost never seen it so the risk is worth it!

There were lots but no one cared!

I suspect I’m the only person who noticed! Words were fumbled names were re-run; and lots more but.. and it’s a big but… it didn’t get in the way. Compare that to the inexperience presenter who wants to be be better and so spends nights angsting (is that a verb? it is now!) over mistakes, real or imagined. Real pros just deal with it and roll on and it doesn’t matter!

Note: I’m not talking about oft-repeated fillers or “errrrrrrs”  which might have spoiled things, but my point here is that small mistakes just made the who thing seem more realistic, less artificial and more trustworthy.

You mean apart from the hundreds and hundreds of thousands of pounds worth of audio capture, editing, mixing and broadcasting kit? (And God alone knows how much that we couldn’t see!). Well yeah.. that…

…. my point is that the tech was invisible, transparent, un-noticed. And the result was that we all listened to what was being said, concentrating on the important, not the trivial.

One of the reasons we didn’t notice the tech was that it was prepared before we got in. Don’t let your audience see you setting up. (Never let them see you fuss, it undermines your credibility as a presenter!)

Side-note: before I get dozens of people saying that this justifies their approach of never using slides, that’s not what I said. If your audience needs slides use them: if it doesn’t, don’t. Stop pretending you and you alone are right FFS!

I’m sure there were other things I could have learned if I’d been trying to spot mistakes – but that’s kind of the point! The presentation was so entrancing that even I (with a cynical and error-spotted head on!) concentrated on the content.

What’s your thinking?  Were you there?